Conviviality, vitality and loads of energy for the coming years: All of this can be expected at a 90th birthday party, especially when the celebrant has such big plans for the coming years. Not only did the gala event commemorating the 90th anniversary of the German Academic Exchange Service (DAAD) reveal how much the DAAD is appreciated by numerous well-wishers, but also how important the work of the DAAD is for the future. “Understanding through dialogue, responsibility in times of crisis, working to build a common order – these are the goals of our joint efforts,” said German Federal Foreign Minister Dr Frank-Walter Steinmeier in his keynote speech emphasising the role of the DAAD as an “indispensable” partner in shaping German foreign academic policy.

In her welcoming speech, DAAD President Prof Margret Wintermantel stated that tradition and innovation are closely connected at the DAAD – just as social and political circumstances are intricately tied to very personal qualities. Academic exchange offers scholarship holders the opportunity “to become veritable citizens of the world” and has “immeasurable value” for one’s personal development. This was demonstrated during the evening’s festivities by DAAD scholarship holders from around the world who highlighted important events in their lives against the backdrop of the DAAD’s 90-year history. For example, the young woman from Tajikistan who entered school in 2001, the same year “GATE Germany” was established – the international university marketing consortium of the DAAD and the German Rectors’ Conference. According to the young woman, German universities enjoy an excellent reputation today in her home country. Or the Romanian scholarship holder who recalled how the DAAD offered students in the Eastern Bloc a path to the West and continues to allow young Eastern Europeans to enjoy the freedom of studying beyond borders. 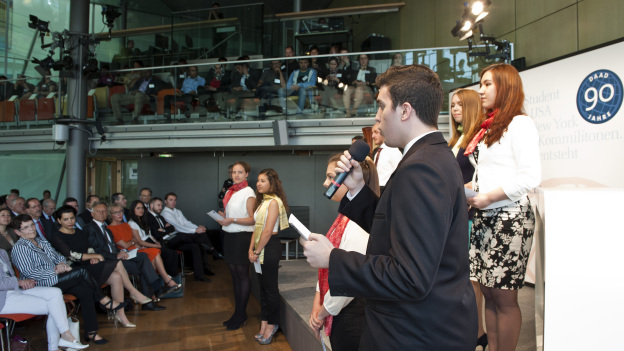 In the face of the numerous conflicts and crises in 2015, Margret Wintermantel emphasised that international students can experience “security, the rule of law and academic freedom” when they come to Germany. The President stressed the impact of academic exchange on strengthening the innovative capacity of a society and its significance as “the lifeblood of scientific progress”.

“Understanding through dialogue – knowledge and insight through exchange”; Federal Foreign Minister Steinmeier designated these “mainstays” of German foreign academic policy as the fundamental goals of the DAAD. He also associated them with the ideals of the Heidelberg student Carl Joachim Friedrich who, by initiating a German-American student exchange programme, helped pave the way for establishing the DAAD in 1925. Like President Wintermantel, Steinmeier did not attempt to gloss over the missteps of the DAAD during the years of National Socialism when the organisation willingly aligned itself with the political ideology of the Nazi regime. However, Foreign Minister Steinmeier also pointed out that when the DAAD was re-established in 1950, it reaffirmed the ideals of the student and future political scholar Friedrich. Today in 2015, it continues “to promote a peaceful order in a conflict-ridden world”. Steinmeier acknowledged the DAAD’s efforts to keep the channels of dialogue with Russia open and drew particular attention to the situation in Syria: “We cannot stand by and watch the conflict result in a lost generation.” He referred to the new scholarship programme “Leadership for Syria”, launched by the Federal Foreign Office and the DAAD, which will provide scholarships to over 200 Syrian students so that they will be able to rebuild their homeland once the war is over. 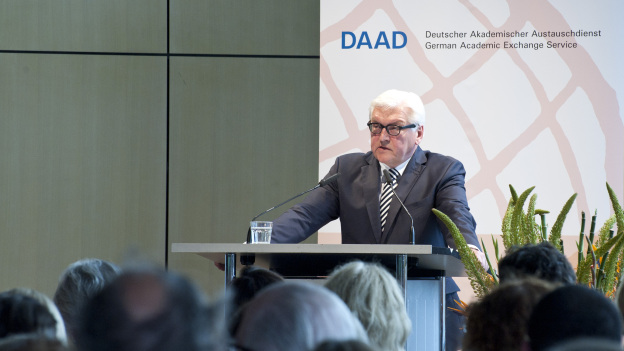 Steinmeier also mentioned the goals of the DAAD, incorporated also in the German government´s coalition agreement, which aim to significantly increase the number of foreign students in Germany and offer one out of every two German students the opportunity to gain academic experience abroad by the year 2020. “This can be achieved,” Steinmeier asserted, “on account of the strong international networks which the DAAD has established.”

Cornelia Quennet-Thielen, Secretary of State at the Federal Ministry of Education and Research (BMBF), also highlighted the DAAD’s global network and its sustainable structures. She remarked that the DAAD is a “real global player” and does much more than support individual academic mobility – e.g. establishing international dual degree programmes, acting as an intermediary for global partners in the “Strategic Partnership and Thematic Networks” funding programme, carrying out modern university marketing campaigns and supporting outstanding transnational education projects like the German University in Cairo and the Turkish-German University in Istanbul.

Dr Friedrich Kitschelt, Secretary of State at the Federal Ministry for Economic Cooperation and Development (BMZ), recalled the DAAD’s “long tradition of supporting developmental policy”. He emphasised the importance of the DAAD´s long-standing global presence via its regional offices and information centres which have facilitated “trust and resilient working relations” over the years. As a recent example of the achievements, Kitschelt mentioned its involvement in establishing the Pan-African University (PAU) and the German-Mongolian Institute for Resources and Technology (DMHT), as well as supporting a programme for nutrition security and conflict prevention with 1,000 scholarships. Kitschelt reiterated that “every society needs transformative agents”. The gala event in Berlin also demonstrated how extensively the DAAD has influenced people’s lives and encouraged them to assume social responsibility. 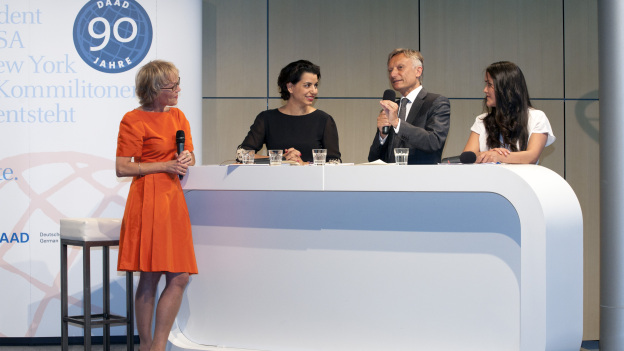 Three impressive individuals shared their personal stories in a discussion, moderated by ZDF reporter Luzia Braun, a former DAAD Lektor in Italy herself. The members of the group were Dr Amel Karboul, who served as Minister of Tourism in the Tunisian transitional government from January 2014 to February 2015, Dr Marek Prawda, EU ambassador for the Republic of Poland, and Salomé Bravo, an Ecuadorian student who is presently studying Peace and Conflict Research at the University of Magdeburg. While Amel Karboul and Marek Prawda are DAAD alumni, Salomé Bravo is a current DAAD scholarship holder. The young woman described how her studies and visit abroad have played an integral role in shaping her personality. Even if she were to discard her predetermined “Plan A”, Bravo claimed that she “always feels ready for change, and thus prepared to take on responsibility”. The same applied to Marek Prawda, who in looking back at his studies, confessed that sociologists had a reputation for being notorious “troublemakers”. He described how, after leaving Hamburg and returning to Warsaw 25 years ago, he helped shape the democratic transformation in his home country.

“When things are difficult, someone just has to stand up and say ‘yes!’” said Amel Karboul, explaining her motivation for accepting the position of Tunisian Minister of Tourism despite a myriad of unknowns. She drew the strength she needed from her time in Germany. In 1991, Karboul came to Heidelberg to learn German on a DAAD-funded government scholarship. In 1996, she completed her Mechanical Engineering degree programme at the University of Karlsruhe (now KIT), the first woman ever to graduate as the top of class in that course of study. At the gala event in Berlin, Amel Karboul delivered best wishes from her home country – and asked the audience on behalf of all Tunisian DAAD alumni to join in a round of “Happy Birthday”. The spontaneous and cheerful singing was a fitting conclusion to a wonderful evening at which everyone took joy in past achievements and looked forward to coming challenges with renewed vigour.