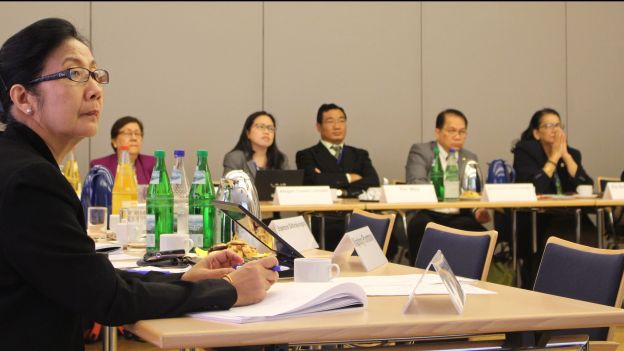 The SHARE study visit was an important step toward fostering academic dialogue between the EU and ASEAN.

Exchange between Europe and Southeast Asia: The “European Union Support for Higher Education in ASEAN Region (SHARE)” is a project that aims to share the experience and competence gained through the Bologna Process with partners in Malaysia, Indonesia, Vietnam and the rest of the ASEAN member states. The DAAD is part of a European consortium coordinating the SHARE project which promotes the implementation of certain academic standards for the ASEAN higher education sector by 2018. A Southeast Asian delegation of representatives from universities, quality assurance departments, education ministries and student bodies, recently visited their project partners in Brussels, Ghent and Bonn.

The Bologna Process is widely regarded as a success story despite the obstacles it had to surmount. Consequently, it has generated interest not only in Southeast Asia but around the world. The ten member states of the ASEAN association, which includes Malaysia, Indonesia, Vietnam, Thailand and the Philippines, are not only working to form a joint economic community, but also a harmonised higher education sector. This entails, for example, comparable academic degrees, measures to ensure more transparency of content in degree programmes and increased mobility for students to better prepare them for the labour market.

The DAAD is part of a consortium, supporting the ASEAN member states in this process through the project “SHARE, European Union Support for Higher Education in ASEAN Region”. Headed by the British Council, the consortium also includes Campus France, the Dutch internationalisation agency EP-Nuffic, the European University Association (EUA) and the European Association for Quality Assurance in Higher Education (ENQA). SHARE is comprised of several sub-projects which encourage policy dialogue, strengthen quality assurance in teaching, enhance student mobility with scholarships and develop a credit transfer system which will enable universities in the ASEAN states to transparently evaluate academic achievement. The EU has agreed to finance the consortium until the end of 2018 with almost ten million euros. “The ASEAN states want to become competitive on a global scale through regional competition,” explains SHARE project director Dr Stefan Hell from the British Council. Education is an area which is playing an increasingly significant role in this.

Benefiting from the experience of the DAAD

In order to learn how Europe’s universities implemented the Bologna Process, the ASEAN delegation was invited by the DAAD, EUA and ENQA in early October to visit the University of Ghent, the DAAD regional office and European University Association in Brussels, and the DAAD headquarters in Bonn. “We wanted to show the participants what kind of difficulties universities could encounter while implementing the process,” says Michael Hörig, DAAD head of section for development cooperation, partnership programmes and higher education management. The DAAD sub-project highlighting the areas of quality assurance and qualification frameworks is coordinated by the DAAD regional office in Jakarta with support from university management expert Marc Wilde in Bonn. The project stands to benefit from the experience gained by the DAAD in this area through its previous involvement in projects funded by the Federal Ministry for Economic Cooperation and Development (BMZ).

The term “qualifications framework” may sound dauntingly bureaucratic, but it is, in fact, of central importance. Prior to the Bologna reform, course content was primarily determined by what universities expected students to know by the time they graduated. With the reform now in place, there is a stronger focus on learning outcomes – knowledge, skills and competence – which students should acquire during their degree programme, i.e. reading comprehension, ability to analyse and solve problems, think creatively, etc. These outcomes are linked with qualification frameworks. “In the SHARE sub-project, we wish to work together with the universities in ASEAN to analyse what it means for universities to focus on learning outcomes – from the faculties to the degree programmes to the individual modules,” explains Michael Hörig. For the universities, this can be equivalent to a cultural transformation– something we’ve seen in Europe as well. In the area of quality assurance, the project aims to provide support to the Southeast Asian partners as they develop regional standards and guidelines, and anchor these at the national level through dialogue and training measures. By involving various organisations and interest groups, the goal is to promote a general understanding of the quality of instruction and strengthen the corresponding quality assurance structures. “We want to share the experiences we’ve gained in Europe,” says Hörig. Standards and guidelines were defined in Europe and converted into higher education policies by the European ministers of education. According to Hörig, the aim is to make such guidelines the standard in the ASEAN region as well.

“A regional initiative as large as Bologna will require commitment and political will,” says Abigail Cuales Lancet, deputy director of the SEAMEO Secretariat responsible for higher education cooperation between the ASEAN member states. She admits that European efforts to standardise procedures in higher education were financially demanding and required extensive time and resources. All participants of the Bologna Process were forced to make compromises. And getting the student bodies involved in the process was vitally important, as delegate John Paulo Garcia delas Nieves emphasises. Nieves, student council chairman at the University of the Philippines Diliman, explains that “in order to find solutions for higher education, governments must listen to the opinions of all the participants, which also includes the students.” DAAD section head Michael Hörig sees SHARE moving in the right direction: “The delegation was comprised of representatives from universities, quality assurance departments, ministries of education and student bodies – such diversity is rare.” This informal setting proved to be a big plus for the project. The participants left feeling much more confident that they didn’t have to copy Europe’s solutions, but rather find their own Asian approach.