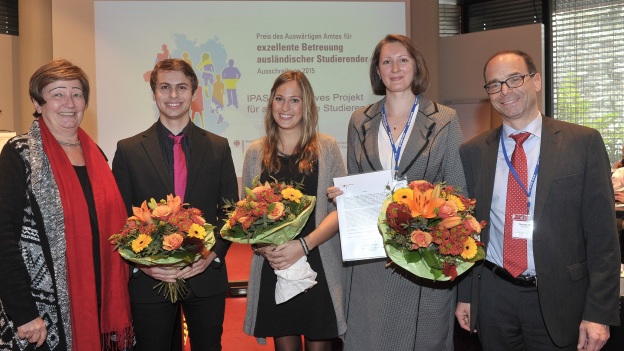 Recognition of outstanding work: DAAD Secretary General Dorothea Rüland with Simon Natterer and Luisa Hafner from the student initiative IPAS at the University of Koblenz-Landau, Iryna Shalaginova, Head of the International Cooperation Unit at the university, and Ronald Münch, Head of the Work Unit “German Houses of Research and Innovation, Research Policy” at the Federal Foreign Office” (AA)

“It is important for us to set up a coherent system within higher education that covers the four phases of the study cycle, namely entry, preparation, mentoring and support, in addition to a successful transition to the labour market,” said DAAD Secretary General Dr. Dorothea Rüland at the start of the discussion round dedicated to “How to handle refugees at German universities”. It is currently only possible to project and estimate how many refugees actually wish to study in Germany. After consulting with the Federal Office for Migration and Refugees (BAMF) Dr. Christian Thimme, Head of the Division Project Policies and Internationalisation of Higher Education in Germany, the DAAD is now estimating that there are approximately 30,000 to 50,0000 additional refugees qualified to study, who will ultimately come to the universities in the course of time. This represents a huge challenge for the international offices, Thimme says.

How do the universities see the situation? Where do problems exist? What solutions are available? The DAAD discussed these questions with the universities’ internationalisation experts at a meeting of the relevant heads. Subjects discussed included an increase in the number of preparatory courses (including expansion of the infrastructure necessary for this), BAföG, the recognition of academic achievements, explanatory information regarding the dual education system, programmes with restricted admission and lack of student accommodation. At the beginning, Christian Müller (Director of the Strategy Department at the DAAD) underlined the guidelines that must apply when dealing with refugees at German universities: “We must not pit the refugee situation against the internationalisation of universities.” And: “We must not make any concessions with regard to our quality standards.”

Internationalisation as a success factor

Enhancing the quality at the universities through internationalisation was the topic considered by the heads of international student offices considered during the opening panel discussion. Prior to this, Bert Verveld (President of the Amsterdam University of the Arts) gave an overview of four decades of internationalisation strategy using the University of Groningen as an example in his presentation on “Change management at higher education institutions”. Although Verveld referred specifically to the Netherlands during his presentation, his outline of the development of organisational structures of higher education institutions in the international field struck a nerve in the audience.

Further points on the agenda included the award of the “Prize for excellent international student support services at German universities” for 2015 sponsored by the Federal Foreign Office (see information box) as well as focus on specific aspects of internationalisation at universities. The work group “Refugees with an academic background: Potential or challenge?” generated considerable interest. André Nollmann, Head of the International Office at Magdeburg-Stendal University of Applied Sciences, was among those to speak. The “Integration of political refugees with academic backgrounds or ambitions” initiative at the university is considered an example of good practice, as it is one of the first complete packages in Germany to lead to a university qualification. “Fifty refugees have studied at the university since summer 2015,” says Nollmann. “No special treatment or leniency was shown regarding quality standards during selection.” If records were incomplete, admission tests were required. This was complemented by preparatory German language courses at a summer school, a buddy programme and a round table for a regular exchange between participating lecturers, students and refugees. On 11 November, Magdeburg-Stendal University of Applied Sciences was awarded the 2015 federal state integration prize in the category “Education, training and work – key to successful integration” by the government of Saxony-Anhalt for its achievement.

Student initiative at the University of Koblenz-Landau is honoured

The 2015 “Prize for excellent international student support services at German universities” sponsored by the Foreign Office goes to the student initiative IPAS – Integratives Projekt für ausländische Studierende (Integrative Project for International Students) at the Landau campus of the University of Koblenz-Landau. The prize is endowed with €20,000. The DAAD is responsible for selecting the prize winner.

IPAS was established by international and German students in Landau in 2002. The initiative helps the international office to support foreign students and offers a series of integrative measures for international and German students focusing on the intercultural dimension, which run throughout the entire cycle of study. The initiative’s good networking both inside and outside the university was highlighted in the justification for the award of the prize. It is moreover characterised “by an exemplary voluntary commitment in the conveyance of language and intercultural skills, with student volunteers prepared for their tasks by means of a comprehensive train-the-trainer concept”.

DAAD Secretary General Dorothea Rüland and Ronald Münch, Head of the Work Unit “German Houses for Research and Innovation, Research Policy” at the Federal Foreign Office, conferred the award during the meeting of the heads of international student offices held at the premises of the Wissenschaftszentrum Bonn.