Creating a future together 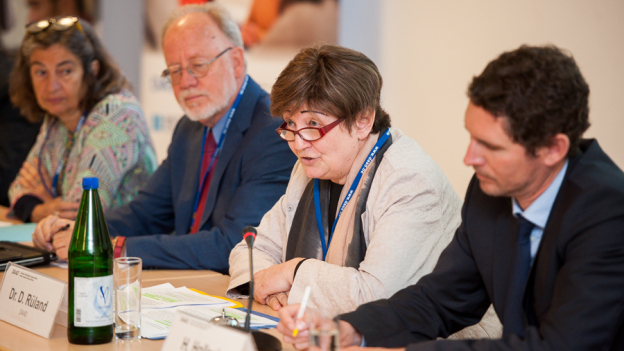 The DAAD has launched the HOPES programme with its European partners British Council, Campus France and Nuffic: DAAD Secretary General Dorothea Rüland (second from left) presented the programme in Brussels together with high-ranking representatives of these institutions.

There must be no lost generation in Syria – the DAAD and its European partners the British Council, Campus France and Nuffic in the Netherlands all agree on this. In a DAAD expert seminar held in Brussels, more than 100 experts and interested parties discussed how refugees qualified to study could be offered perspectives through education – in Germany, Europe or the Middle East.

More than five million mostly young people have fled the Syrian civil war in the past few years. Of the almost 500,000 refugees who applied for asylum in Germany in 2015, 80 per cent were under the age of 35. Many of them had to break off or at least interrupt their university studies or schooling. Since the war started, the percentage of Syrian students aged between 18 and 25 has dropped from 20 to less than 5 per cent.

To ensure that a generation is not lost among the Syrian refugees, the DAAD has set up a number of programmes in recent months. These endeavour to integrate refugees who are qualified to study into the German system of higher education, or to support them in the Middle East. The DAAD’s Regional Office in Brussels invited 120 interested parties to the Permanent Representation of the Federal Republic of Germany to the European Union in Brussels on 11–12 May. The purpose of this event was to allow an exchange on how to support refugees in Germany, Europe or neighbouring countries of Syria who are qualified to study to regain a perspective for their future.

A fundamental issue for the DAAD

“We already had the idea for this seminar last year,” says Nina Salden, Head of the DAAD’s Regional Office in Brussels. “The subject of integration into the higher education system is fundamental for the DAAD.” The question of what could be done on a European level moreover came up repeatedly during discussions with representatives of the European Union. “We are pleased with the positive response to the seminar,” says Nina Salden. “Most of the participants are involved in work with refugees and education, and contribute actively – we have managed to act as a platform to bring stakeholders together for collaborative brainstorming.”

The first day of the seminar was dedicated to the subject of integration of refugees into the European higher education system. On the second day, the seminar addressed the commitment in the neighbouring countries of Syria. “Education gives people an opportunity to improve their lives,” said DAAD Secretary General Dr. Dorothea Rüland. “We need these young people – either here in Germany or to rebuild their home country in the future.” The DAAD is supporting the integration of refugees into the German higher education system with a new programme portfolio. Free access to the Test for Academic Studies (TestAS) evaluating aptitude, the uni-assist application procedure and the onSET online language placement test support prospective students and universities in the assessment of competences and potentials, enabling rapid access to higher education for refugees qualified to study. Every year, the “Integra” programme finances 2,400 places at preparatory colleges in addition to language courses and subject-specific propaedeutic courses at universities to prepare refugees for studies in Germany. The “Welcome – Students Helping Refugees” programme on the other hand supports student initiatives set up to assist and advise refugees at their university in a variety of different ways. All programmes are funded by the Federal Ministry of Education and Research (BMBF).

Dr. Peter Rösgen, Ambassador of the Permanent Representation of the Federal Republic of Germany to the European Union described the refugee situation as “both a challenge and an opportunity”: “The integration of the young people in our education system must be successful.” According to Laura Corrado, Head of the Unit Legal Migration and Integration at the European Commission’s Directorate-General for Migration and Home Affairs, this differs from the case of migrant workers because there are also humanitarian reasons for supporting refugees. She announced an “Integration Action Plan” for refugees to be published by the European Commission at the beginning of June. In addition to support by member states through EU projects, education as well as integration of refugees in the labour market is to play a central role. “This commitment is a long-term investment that will benefit both the refugees and us.” Julie Anderson from the Directorate-General for Education and Culture at the European Commission called for a common European approach: “Information exchange, funding, orientation – this benefits all the stakeholders.” Initiatives for social integration are supported by the European Union within the scope of the Erasmus+ programme with €400 million until 2020. 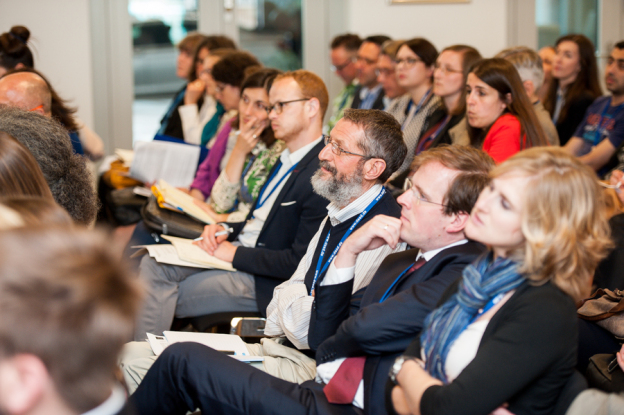 ​An interested audience: More than one hundred experts and guests met in Brussels to discuss how to integrate refugees into universities

​The approach to integration adopted by the University of Malmö in Sweden is remarkably unusual. Refugees are trained as assistant teachers (of which there is a shortage in Sweden) in courses lasting several weeks. By the end of the year, 100 to 150 refugees will have been able to take advantage of this offer, estimates Patricia Staaf of the university. Special about the course is that training is in Arabic to enable the refugees to gain a deeper understanding. At the same time, they learn Swedish in language courses tailored specifically to the field of education. “The aim is to supplement existing skills and knowledge,” says Staaf. Work prospects are good. “They will not be employed as “proper” teachers immediately, but can continue their training,” Staaf reports, “we have had good experiences with this approach.”

Solutions in the region

The debate on the more than one million refugees who entered Germany since January 2015 has dominated political and social discussions in the country for months. DAAD Secretary General Rüland emphasised in Brussels that just a small proportion of Syrian refugees actually comes to Europe. Most flee to neighbouring countries such as Jordan, Iraq, Turkey, Lebanon or Egypt where the culture and language are more familiar. “When they however do not get any education, find work or see prospects for their future, they move on,” said Rüland. In order to create perspectives in the neighbouring countries, the DAAD has just set up the “Higher and Further Education Opportunities and Perspectives for Syrians” (HOPES) programme together with its European partners the British Council, Campus France and Nuffic in the Netherlands. The programme is financed by the EU Regional Trust Fund in Response to the Syrian Crisis, the “Madad Fund”. “The cost of financing a scholarship in Europe for every Syrian qualified to study simply could not have been covered,” said Madad Fund Manager Nadim Karkutli in Brussels. “We knew that we would have to find solutions in the region.” Funding totalling €12 million until 2019 is intended to make it possible to give academic guidance to more than 40,000 young people in the neighbouring countries of Syria. Three hundred full scholarships will be awarded and several thousand Syrians are to benefit from English or advanced study courses.

The project’s importance in the participating countries is demonstrated by the fact that high-ranking representatives of all three DAAD partner organisations travelled to Brussels, in addition to DAAD Secretary General Dorothea Rüland, to attend a press conference held before the seminar. These included Gordon Slaven (Director of Higher Education at the British Council), Béatrice Khaiat (Director-General of Campus France) and Freddy Weima (Director-General of Nuffic). “Europe is back and addressing its problems,” said Béatrice Khaiat. Gordon Slaven described the commitment to higher education as “increasingly important, the longer the crisis continues”. The importance of the offers for the refugees themselves is indicated by the success of the DAAD’s “Leadership for Syria” programme in Germany and the “New Perspectives” programme in Jordan and Syria. There were over 5,000 applications for the 200 scholarships available in the “Leadership for Syria” programme, reported Dorothea Rüland. “The young people know that their chance lies in education and they are highly motivated to use it.”