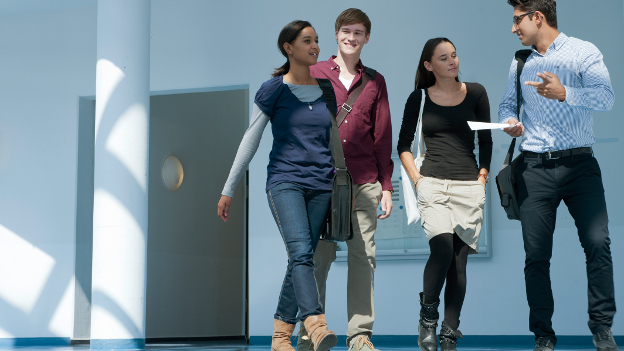 With the “Integra” programme, academically qualified refugees are given the chance to prepare for university study in special programmes offered at German universities and preparatory colleges. The goal is to get student refugees accustomed to the higher education sector as quickly as possible. A look at a selection of funded projects.

When Ibrahim Omar talks about his dream, his voice gets softer. “I want to become a doctor – preferably a cardiologist,” says the 18-year-old Syrian Kurd. “I hope that I can begin my studies next year.” When Ibrahim Omar fled from Damascus with his brother six months ago, he was forced to leave his dream behind. He had to quit medical school after only one month because of the civil war. When he arrived in Germany, he couldn’t speak a word of German. But he learned so quickly that he was allowed to attend a German course with 24 other refugees at the language centre at the University of Hannover, funded through the new DAAD funding programme “Integrating Refugees in Degree Programmes” (Integra), and can now prepare for the DSH examination. “I am very happy here,” says Omar.

The Integra programme is part of an extensive set of measures developed by the DAAD, for which the Federal Ministry of Education and Research (BMBF) has allocated a total of 100 million euros until 2019. Through Integra, academically qualified refugees are integrated into the universities and receive language instruction and subject-specific propaedeutic courses to prepare them for university study.

Shifting focus away from the “refugee” status

Leibniz Universität Hannover intends to shift focus away from one’s “refugee” status as fast as possible. To this end, refugees are placed in courses together with other international students. “We have self-paying foreign students from countries like Argentina, Egypt, China, India, Japan, Poland and Russia in courses together with refugees from Syria, South Sudan, Iraq and Iran,” explains course coordinator Hubert Fleddermann. The Syrian student Ahmad Abu Shehab appreciates this internationality: “We are a tight-knit group of people from around the world. That motivates me, and it’s a great opportunity to learn more and more.” While Shebab studied English Literature in Syria, he’s now pursuing ‘something practical’: Mechatronics.

Enormously positive response to the programme

“It’s very impressive to see how quickly universities have succeeded in establishing programmes for refugees,” says Katharina Riehle, head of the section “University Programmes for Refugees” at the DAAD. She goes on to explain that many institutions of higher education have considerable experience with international students and had expanded and adjusted their structures accordingly, while others swiftly responded to the changing circumstances by creating new programmes. Integra currently funds 172 projects at 68 universities of applied sciences, 63 universities, teaching training colleges, art academies and 37 preparatory colleges (Studienkollegs). The BMBF has allocated resources to create up to 2,400 additional places at such preparatory colleges in the next four years. Universities receive 420 euros per participant per month from the Integra funding programme.

Fourteen refugees from Syria, Iraq, Afghanistan, Gambia and Somalia have been busy taking German, English, Maths and orientation courses for several months now in Mannheim. At three of the twelve branches operated by the Cooperative State University of Baden-Württemberg, Integra funding is being used to prepare academically qualified refugees for admission to a cooperative study programme. The university maintains the closest cooperative partnership in Mannheim with the software developer SAP. The company has already selected 13 young men and one woman for their in-house training programme, provided they successfully participate in the preparatory courses until September. SAP will cover part of the cost of the programme. “Ours is a pilot project,” says Dean of Studies Prof. Clemens Martin.

At first, the project supervisors weren’t especially hopeful that the university would secure Integra funding. That’s why the university is proud to have received almost 30,000 euros from the Integra programme to offset the cost of five months of language and preparatory courses. “We see ourselves as multipliers,” Martin points out. In fact, the university’s Mannheim branch maintains partnerships with 2,000 companies, 200 of which in the degree programme “Business Information Systems”. Aside from SAP, other companies have also expressed interest in supporting refugees. “They’re concerned about the high administrative costs, but we’ve done a lot of the footwork for them,” says Martin. The “Business Information Systems” cooperative study programme was established in 2015 for young men and women from Ireland and Hungary in response to the shortage of specialists in this field. The first semester is taught entirely in English with more and more German-language courses added as the programme progresses. “The programme is now established and well-suited to quickly integrate refugees,” Martin says. “It’s a huge opportunity for the refugees,” he adds, “They realise that and work hard.”

Subject-specific knowledge for the assessment test

In Bernburg, Dessau and Köthen, 81 academically qualified refugees from Syria, Afghanistan and Iran are preparing for admission to a degree programme at the Anhalt University of Applied Sciences. “Most of the Syrian students here are studying for the DSH university language exam,” says Margitta Kunze, director of the Köthen state preparatory college. Those without a university entrance qualification can prepare for the admissions examination by taking a two-semester preparatory course funded through Integra; additional places are financed by the BMBF. Students learn more German in the first semester, and Maths and Business Administration in the second semester. At the end, the participants take the Assessment Test for Foreign Applicants (FSP). Most refugees would like to study Technology and Business,” reports Margitta Kunze. “And we do all we can to support them.”

Funding at the right time

The students enrolled in the preparatory college (Studienkolleg) at the Freie Universität Berlin are required to learn 15 hours of German and ten hours of Maths, Physics and Biology per week. With funding provided by Integra, 80 students have been learning German there since the winter semester 2015; 17 men and seven women have already been accepted into one of the preparatory courses. “The students are often very excited and motivated, even though their living situation and frequent trips to the municipal authorities make it difficult to learn,” says Stefanie Böhler, coordinator of the Welcome@FUBerlin programme. “It’s important to give them time, perhaps more so than for other international students,” she adds. If at the start of summer holidays at the end of June students still lack the knowledge they require for their exam in September, the FU Berlin offers a volunteer-based instruction programme on Saturdays at their Centre for Independent Language Learning. “We’re seeing an extremely positive attitude toward the refugees in all the departments,” says Dr. Herbert Grieshop, director of the International Affairs division. Providing such courses is time-consuming and costly, and just until recently, the university had to pay for these expenses in advance. “We acted on our inner conviction and started the programme on our own – in terms of sustainability, a funding programme like Integra comes exactly at the right time.