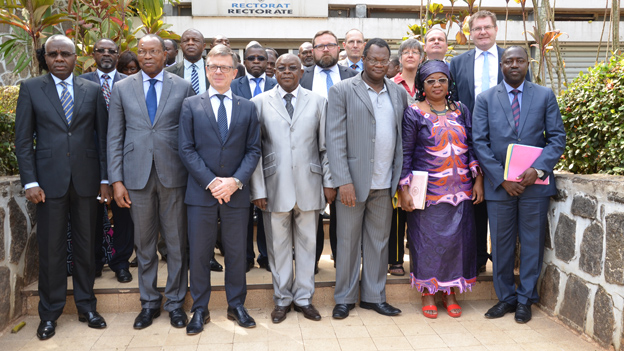 The German Ambassador Hans-Dieter Stell and the Vice-Rectors for Research and for Teaching of Université de Yaoundé 1, Emmanuel Tonye und Daniel Abwa (1st row, third, second, and fourth from left) participated in the opening ceremony of the Yaoundé-Bielefeld Bilateral Graduate School "Natural Products with Antiparasite and Antibacterial Activity" (YaBiNaPA)

A German-Cameroonian graduate school promotes the development of natural remedies. Ya-BiNaPA is a project of the new DAAD programme for bilateral graduate schools that is orient-ed according to the Sustainable Development Goals of the United Nations.

Cameroon does not occur to many German rectorates when it comes to internationalization. Bielefeld University, however, is one step ahead. The University currently establishes a joint graduate school together with the University of Yaoundé I, which is the largest university of the African country with 50,000 students and belongs to the top 30 of African universities. “We intend to investigate together plants that are used in African ethnomedicine especially for treatment of parasite diseases like ma-laria and also bacterial infections,” says Norbert Sewald, Professor of Chemistry at Bielefeld Univer-sity. He is the German coordinator of the Yaoundé-Bielefeld bilateral graduate school Natural Prod-ucts with Antiparasite and Antibacterial Activity YaBiNaPA, which officially started its activities during a kick-off meeting in mid-February in Yaoundé in the presence of high ranking university representa-tives and the German ambassador. 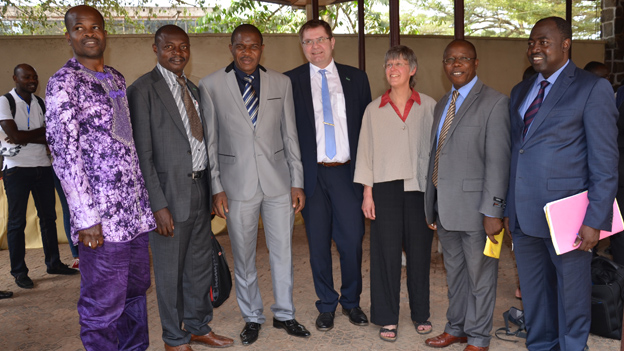 The German coordinator Norbert Sewald (fourth from left) and the Cameroonian YaBiNaPA coordinator Bruno Ndjakou Lenta (first from right), with alumni of Bielefeld University and Partners of the graduate school

In tropical countries like Cameroon bacterial and parasite diseases form a large problem. Malaria is one example: Cameroon is among the countries with a high risk of Malaria infections throughout the year. The disease is being transferred by stitches of the Anopheles-mosquito. Without treatment especially Malaria tropica often ends deadly. “The risk of Malaria in Cameroon is an enormous socie-tal problem,” says Sewald. Active ingredients from medicinal plants and natural products that are being analyzed and further developed by the new graduate school might help fighting these diseases.

However, this type of research does not start at point zero. Since quite some time it is known from e.g. traditional Chinese medicine that the active ingredient artemisinin that is used against Malaria can be extracted from the plant Artemisia annua. “Africa has a huge potential in natural products from plants and microorganisms. However, despite local research, no broadly available medicine could be developed yet,” says Norbert Sewald. What is missing is a network to focus and combine research expertise.

This shortcoming should now be levied by the German-Cameroonian graduate school. The German Academic Exchange Service DAAD is funding the new collaboration until 2020 with more than 2.1 million EUR from the Federal Ministry for Economic Cooperation and Development (BMZ). It is part of the programme Bilateral SDG Graduate Schools where DAAD supports the development of seven graduate schools in developing countries. The programme should assist the realization of the Sustainable Development Goals defined by the United Nations, for instance the creation of educational structures or the sustainable usage of natural resources. 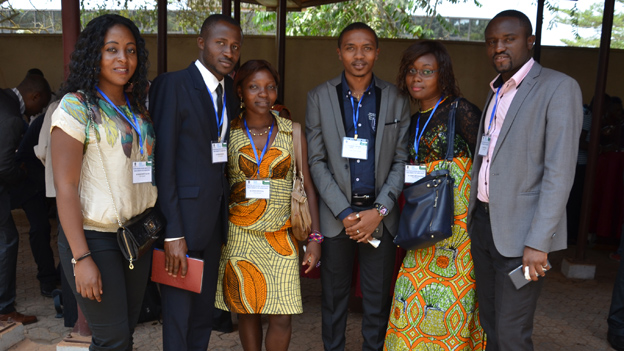 Future hope: six of the 20 new scholars of the graduate school

“DAAD selected this project on the activity of traditional medicinal plants to educate MSc and PhD students in Cameroon in this important sector,” says Stefan Bienefeld, Head of the DAAD division for Development Cooperation and Transregional Programmes. This goal is being implemented by the graduate school in a commendable way. Many of the Cameroonian scientists that are involved in YaBiNaPA have been guests in the past years as postdoctoral fellows, PhD students or students in Norbert Sewald’s research group at Bielefeld University. Subsequently they returned to Cameroon to continue research and educate PhD students – according to Stefan Bienefeld a paradigm of suc-cessful internationalization. “After high level education in Germany the scientists return to their home country and pass on their valuable knowledge.”

Graduate school with many advantages

In the graduate school in Yaoundé 20 PhD students are matriculated, mainly chemists, pharmacists, biologists and biochemists. Argan Kelly Wonkam, who obtained his MSc degree at the University of Dschang in Western Cameroon, is one of them. Since the beginning of 2017 the chemist does a PhD at the graduate school and analyses chemical and antiparasite reactions of two plant species from the coffee family Rubiaceae. For him the graduate school brings many advantages. “I have well-equipped laboratories, I have access to scientific data bases and I am able to do interdisciplinary research,” he says.

A liquid chromatography device coupled to a mass spectrometer very much supports these activi-ties. The equipment has been purchased by YaBiNaPA with DAAD funding and will now facilitate the identification of unknown active ingredients in the plant extracts. Moreover, the graduate school will organize seminars on scientific research, invite international experts to give workshops and assist PhD students in career planning as well as establish a communication platform on natural product research to bridge the gap between science and the public.

Daily research at YaBiNaPA is being organized by Prof. Bruno Lenta Ndjakou at the chemistry de-partment in the École Normale Supérieure of the University of Yaoundé I. “Bielefeld University has a Graduate School of Chemistry and Biochemistry that is well functioning,” the Cameroonian YaBiNaPA coordinator says. This can be used as a role model for the organization of PhD education, research management or how to create networks to other scientists and graduate schools. Lenta has been working several times as a fellow in Norbert Sewald’s research group at Bielefeld University - one knows, appreciates, and trusts each other. Sewald emphasizes: “The scientists with whom we col-laborate in Yaoundé have a very good scientific background, are familiar with state of the art labora-tory methods and publish very much.” Sewald himself plans to travel once a year to Yaoundé. “The graduate school levies the long existing collaboration with the scientists in Cameroon on a new lev-el,” the chemist says. He emphasizes to be happy establishing something new that will help people and drive research.