GAIN Annual Conference in San Francisco: “The free spirit will not be ousted”

Culture of Exchange: The participants of the GAIN Annual Conference made use of the diverse dialogue formats

At the 17th Annual Conference of the German Academic International Network (GAIN), more than 550 international scientists met in San Francisco from August 25 th to 27 th, 2017, to learn about research opportunities in Germany. Academics from third party countries were especially interested; some of them feel alienated by the political climate under the Trump administration.

Determined, Ragwa Elsayed wriggles through the ranks of exhibitors who are vying for her attention. The German Sport University Cologne invites visitors to play table tennis, the Goethe University Frankfurt offers tote bags sporting its eponym’s portrait, and free coffee can be had everywhere. Elsayed stops at the booth of the Free University of Berlin. “Do you offer any programs related to kidney research?” she asks in English. The employee writes down her e-mail address and promises to put her in contact with the Faculty of Medicine.

With her red headscarf, the 28-year-old native Egyptian stands out. She currently pursues her second Master's degree at San José State University but is already looking for a PhD program in Germany. “Since US President Donald Trump agitates against Muslims, some people in San José act hostile toward us,” she says. Some of her friends are affected by Trump’s travel ban for six Muslim-majority countries. “Fortunately, I'm commuting from San Francisco. Here I feel respected – but in many parts of the US, the mood has changed for the worse.”

Alongside Elsayed, more than 550 German and international researchers have come to San Francisco to attend the three-day GAIN Annual Conference and obtain information on professional opportunities in Germany. In the legendary Westin St. Francis Hotel, which has hosted nearly all US presidents throughout history, they participate in panel discussions, working groups and the so-called Talent Fair.

“I like the society in Europe even more than in the US,” says Elsayed. “In theory, the United States give me all the possibilities in the world, but to get there, I have to work 12 to 14 hours a day.” To finance her degree, Elsayed assists her professor and works for a medical technology company. She expects a higher quality of life in Germany, where she wants to pursue her career in science, but also enjoy a more open society – and a little leisure. 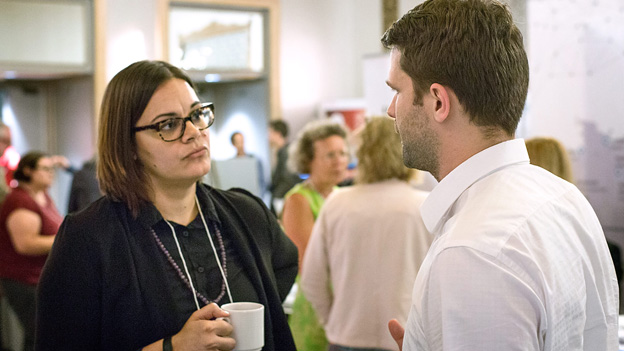 Time for discussions: The GAIN Annual Conference cultivates the exchange of experience

“In many countries, researchers are increasingly discredited. Luckily, Germany continues to show a high appreciation of science,” says Professor Margret Wintermantel, president of the German Academic Exchange Service (DAAD) in her welcoming speech. The DAAD organized the conference together with the Alexander von Humboldt Foundation and the German Research Foundation (DFG).

Wintermantel reminds the audience that the Erasmus exchange program alone has turned 4.4 million students into experienced Europeans within its 30 years of existence. Living abroad has a life-long impact, she says. “Science cannot prevent nationalism and populism, but it can counteract these currents with an attitude of openness and critical thinking.” She pledges to develop transatlantic exchange relations even in difficult times: “Nobody can oust the free and critical spirit of the top US universities.”

Strengthen ties with US universities

Although significantly fewer Germans applied for a DAAD annual scholarship to study in the US this year, Dr. Nina Lemmens, head of the North America office, does not see any cause for concern. “We have seen this before: when the US tightened their visa policies after 9/11, the applications nosedived as well – German students tend to vote with their feet when they dislike the political situation,” says Lemmens. “But we will by no means jump at the occasion and aggressively entice US scientists away to Germany. This would be cynical and short-sighted: no one will be helped if the strongest research country in the world is weakened and its exchange relationships interrupted. On the contrary, the DAAD will even intensify its cooperation with US universities.”

Dr. Jens Bauer is among thousands of researchers who benefit from this collaboration. The 31-year-old material scientist came to UC Irvine in Southern California for his postdoc from the Karlsruhe Institute of Technology. He enthuses about an “easy-going working culture” and “flat hierarchies”. And yet, he is set on returning to Germany after his postdoc – also for his wife's sake. “We are experiencing the same as so many expat couples: I have everything laid out for me, but my wife nearly has to start from scratch. She got a US work permit after several months of waiting, but her professional background cannot be easily translated to the US system: in Germany, she was an apprenticeship supervisor in human resource management, but there are no apprenticeships in the US. My wife had to switch professions and is currently working as part-time event planner,” says Bauer on the sidelines of the Talent Fair.

Ute Mai, who supports postdocs as Managing Director of the Bauhaus Research School in Weimar, is familiar with this problem: “I meet many Germans who want to return. The income is not the reason – in this regard German universities cannot compete with the US Ivy League,” she says from behind the Weimar University’s exhibition booth. “But the standard of living is better in Germany: health care is affordable, the scientists’ partners are more likely to find good jobs, and university daycares help couples to reconcile career and family.”

After several years abroad, however, German scientists typically lose track of possible career paths and opportunities in Germany, stresses GAIN Program Director Dr. Gerrit Roessler. “This is exactly where our network comes in: we keep German researchers in North America informed about current developments in the German science landscape and put them in contact with each other.” GAIN is supported by Humboldt Foundation, DAAD, DFG as well as the German Federal Ministry of Education and Research. “We have group meetings – or ‘Stammtische’ as we say – in more than 50 cities in the USA and Canada,” says Roessler. 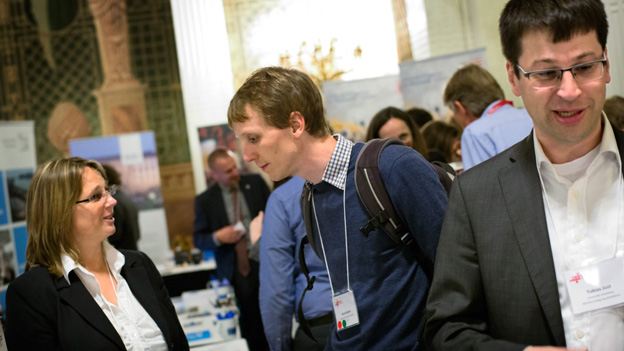 At the exhibition booth of Göttingen University, Dr. Marion Silies gives advice to academics like Jens Bauer and Ragwa Elsayed on how to apply for positions at German universities. Silies did her postdoc not far from here, at Stanford University. “At the time, the GAIN conference reminded me of the possibilities that Germany offers – as well as the deadlines to keep in mind if I want to return,” she says. Silies then made the decisive contacts directly in Germany: “While on vacation back home, I gave lectures at all the locations that interested me.” When she moved back to Germany three years ago, she became group leader at the European Neuroscience Institute in Göttingen.

In addition to German returnees, international researchers also seek out options in Germany. According to Roessler, GAIN received almost 100 applications from scientists currently working in the US who are neither German nor US American.

“We are glad to find all these institutions in one place, so that we don’t have to look for them individually,” says Priyanka Joshi, while strolling from one stand to another with her husband Niravkumar. The 27-year-old pharmacist has given up her job at a multinational company in India to follow her spouse first to Brazil and then to California. “But if we go to Germany in a couple of years, that will be our common plan. We are here at the Talent Fair to look for opportunities for each of us.”

Dr. Niravkumar Joshi develops gas sensors that industrial workers wear on their clothes and alert them to excessive gas levels. “Germany is ideal for me, because I learnt that its research is very application-oriented,” he says. “I want the products I am developing to be useful for society.” The couple doesn’t worry about yet another move. “Learning a new language will not be a problem,” says Priyanka Joshi. “We already speak Gujarati, Hindi, English and Portuguese – so why not add German to the mix?”