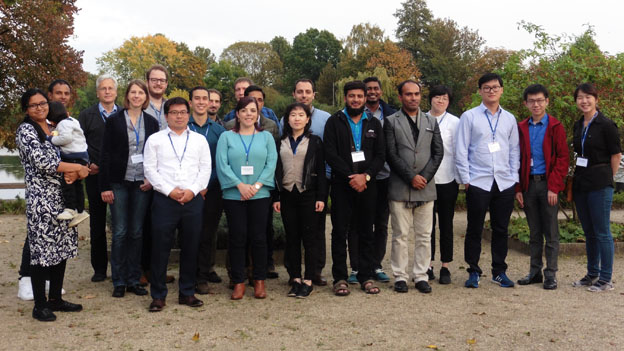 Very welcome guests: participants of the Networking Tour chosen by the DAAD

The DAAD invited outstanding nanoscientists from all over the world to take a look at career paths in Germany during the one-week Postdoctoral Researchers’ Networking Tour (Postdoc-NeT). The highly qualified chemists, physicists and materials scientists were clearly impressed and made large numbers of contacts in their field.

They went straight to the heart of the matter at the Institute of Chemistry and Biochemistry at the Freie Universität (FU) Berlin, where junior group leader Dr Stephan Block introduced his research group to the 19 colleagues from all over the world. The group is working on nanoparticles that are implanted into the body to form compounds with proteins. These tiny particles could prevent viruses damaging the body’s cells. Research is currently being carried out worldwide into effective therapies against viral flu – and the nanoscale offers promising means of blocking the reproduction strategies of pathogens. That is why Dr Irfan Ahmed from Pakistan immediately wanted to know more about the biochemical docking of so-called inhibitors on target cells and Dr Eduardo Martínez from Argentina was interested in finding out about the visualisation of this process. In-depth discussion about specialist methods then began.

“The selected international group of nanoscientists know exactly what they want,” says Dr Christian Schäfer, head of the Research and Studies Section at the DAAD. There were no fewer than 280 applications for this highly sought-after opportunity to find out more about the German research landscape with Postdoc-NeT. The packed programme of the DAAD study tour addressed the interests of leading international scientists and enabled the participants to make valuable contacts with top research institutes at German universities as well as the Fraunhofer-Gesellschaft, the Max Planck Society, the Helmholtz Association and the Leibniz Association during stays in Hamburg, Berlin and Dresden. It also offered an excellent opportunity for the German universities and research institutes that took part in the tour to get to know outstanding junior researchers in their field from all over the world.

Dr Suhair Sunoqrot from Jordan was impressed by the international reputation and connections of the German, and especially the Berlin-based, nanoresearch that was presented during the Postdoc-NeT programme. She had not had any contact with the German research system as a pharmacy student in her native country. “Our lecturers had degrees from the USA or the UK, and we were not made aware of the career and funding opportunities in Germany.” Suhair Sunoqrot also gained her doctorate at the University of Illinois in Chicago in 2013. Since then she has taught at Al-Zaytoonah University of Jordan. The biopharmacist has steadfastly built up an international network and took the opportunity offered by the DAAD study tour. She definitely wants to continue her nanomedical research with a view to the development of medicines and is now looking towards Germany: “The research cluster at the FU fits in perfectly with my research interests and is very relevant to me.”

No other research field is as multidisciplinary as nanoresearch. The boundaries between disciplines are crossed for the benefit of science, Professor Rainer Haag explained to the international visitors. Dr Bharati Gupta from India, who is doing research into supercapacitors at Queensland University of Technology in Brisbane, Australia, is a physicist, materials scientist and holds a doctorate in chemistry.

Gupta also learned about German support strategies for families during the Postdoc-NeT week. At Akademie Berlin-Schmöckwitz, the conference hotel where the travel group participated in a workshop for roughly 60 junior researchers in another Berlin-based collaborative research centre (SFB 951: Hybrid Inorganic/Organic Systems for Opto-Electronics), Gupta also discovered what wide-ranging childcare options are available for researchers’ children in Germany. For the young mother, who paid for her husband to accompany her to look after their small son, this is another advantage Germany offers as a career location.

Concrete advantages for everyone

Dr Amin Bahrami from Iran also received a great deal of support during the Postdoc-NeT week. He exchanged contact details at the Helmholtz-Zentrum Geesthacht near Hamburg and now hopes to find a path towards concrete cooperation. “I was looking for precisely the technical equipment they have in Geesthacht and for someone who knows all about this research method,” said Bahrami, who was pleased to have found both. He is conducting research on nanoscale metals, especially titanium, at the National Autonomous University of Mexico (UNAM) in Mexico City. His work benefits implant surgery.

The group learned a lot during the Postdoc-NeT week. Countless contacts were made, and discussions about research conditions were also valuable. They were all pleased about the attention the group received in Germany. It will be interesting to see where the new impressions lead, reported Eduardo Martínez from Argentina: “As junior researchers we also live in unstable times – always on the edge of the known and the unknown. But that is what science is about and what keeps us constantly on our toes.”