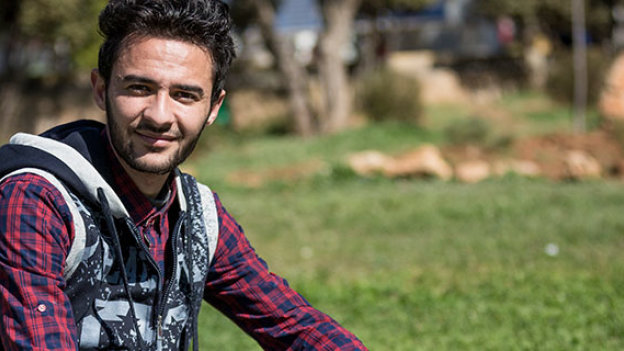 Odai Mousa Alhossin, 21, studies Civil Engineering in his third year at the University of Jordan, in Amman, on a DAFI scholarship. He came from Hama, Syria, by himself in 2012 and was first settled in the city of Zarqa. He was two months into his 11th grade of high school when he fled Syria.

“When I arrived in Jordan, I couldn't go back to high school right away. I encountered some problems. There were too many of us trying to get in. So I had to work in construction for about six months to support myself. I had no one; I could only rely on myself. Eventually, I got in and could finish my high school,” explains Odai.

He continues: “I left Syria because I was approaching the age of 18 and didn't want to be enrolled in the military. Besides, the situation in the country was becoming really critical.”

“That being said, I don't know what I will be doing next. Today I am concentrating on my studies. It gives me a clear purpose. But then what? What will happen? Where will I go? It is very challenging for a Syrian refugee to find work here in Jordan. All I can do right now is focus on my studies.”

"Receiving the DAFI scholarship is the most important thing that's ever happened to me. It has helped me realize my dream of becoming an engineer and will enable me to become a productive member of the community. Today, there is a huge number of Syrian people who are suffering. So I hope to be able to help them."

Background information:
In total, on 1 May 2017, Jordan was host to 659,246 registered Syrian refugees, with 79% of them living in towns and cities across the kingdom. In Jordan, the number of students being granted a DAFI scholarship increased tremendously, from 10 in 2015 to 220 new in 2016, due to the on-going crisis in Syria and the increased commitment of the German Government and other donors to support Syrian students to pursue higher education.


back to main page