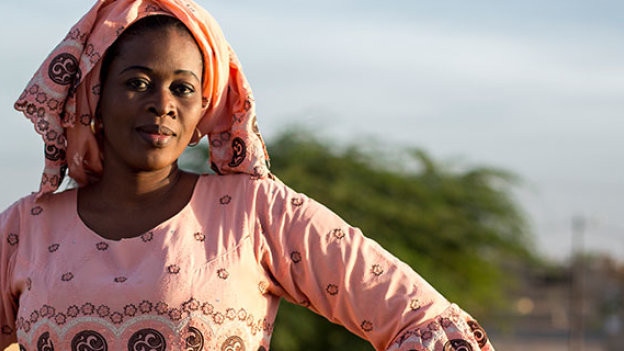 Fatimata, 41, arrived in Senegal in April 1989 at the age of 13 with her parents and many siblings. Her family is from Guidimakha, a region of southern Mauritania bordering Senegal.

The family spent two months in Dakar, then six months in Thies, before being transferred to Dagana, further north. They spent two years there. Fatimata did not have the opportunity to study in school. It was her parents, both teachers, who were teaching their children. Fatimata gave classes to primary school students.

It was not until 1992 that Fatimata returned to school in 5th grade. She was then 15 years old. This chance she owes to a Senegalese who ran a private school. "A good Samaritan," in his own words. Fatimata paid her tuition by retroceding some food donated by UNHCR. She spoke French but had to learn Wolof, Senegal's main vernacular language.

"I have often been relegated to the background because I do not have Senegalese papers. It has always been an obstacle in my professional life, until today."

Thanks to the DAFI scholarship, Fatimata could enroll in the National School of Economics (ENEA) and graduate in 2005 with a DESS in Territorial Planning. "There were 14 nationalities represented in my class. I got on well with everyone. I eased the tensions, I played the role of mediator."

Upon graduation, Fatimata was offered a job with an American NGO, thanks to her knowledge in the field of new agricultural and environmental technologies. She balanced studies and professional life for two years, taking evening classes as well as weekend classes. Fatimata changed positions and organizations several times, even spent two years as a consultant in Mali. She had increasingly important responsibilities but was limited by the fact of not having Senegalese papers.

Until very recently, Fatimata worked for an Italian-Senegalese agribusiness company, as a responsible for the environment and sustainable development. She has now left her job and is looking for a new position.

"All my brothers and sisters have a higher education. My dad always told us that as long as we did not have a bachelor's degree, he did not want to hear about marriage. To my sisters and me, he said that only by having a job, we could support our family."

Background Information:
In 1989, an ethnic conflict broke out in Mauritania and resulted in the expulsion and flight of more than 45,000 people to Senegal, mainly in the Valley region in the north of the country. Twenty years later, between 28 January 2008 and 25 March 2012, some 24,000 refugees chose to return to Mauritania through UNHCR's repatriation program. Some 14,000 others prefer to stay in Senegal as part of local integration.


back to main page