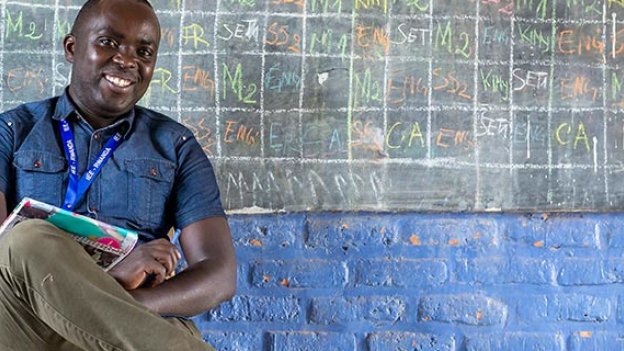 Cairo, 30, is a successful DAFI alumnus (2008-2012). Today he works as an English Education Trainer for the organization "Inspire Educate and Empower (IEE) Rwanda". He is also enrolled in postgraduate studies in Education at the University of Kigali, in order to keep up with the latest developments in his field of work.

In 2012, Cairo graduated from the University of Rwanda (then National University of Rwanda) with a BA in English Linguistics and Literature. Afterwards, he worked as an English teacher for one year, until he was recruited by the Rwanda Education Board (2013-2015) to help support the transition from the francophone to the anglophone school system in the country.

"I love my job so much. I feel we are really contributing. Education is what makes people strong. Someone once wrote that “education is the backbone of the nation”. I have a strong belief in this. I believe that if you can contribute to education by supporting teachers, it will definitely bear fruits."

Cairo grew up in Gihembe camp, in Rwanda's Northern Province, 60 kilometres north of Kigali. His family fled North Kivu, in the Democratic Republic of the Congo (DRC), when the war broke out in 1995. Cairo was seven years old. They were initially settled in Mudende camp, in western Rwanda, but in August and again in December of 1997, armed groups crossed the border from DRC and attacked the camp – murdering hundreds of refugees. Gihembe camp was then established to host survivors of the Mudende massacre.

“Life was really difficult. We had schools in the camp but studying was not easy. I completed my primary and parts of my secondary education there in the camp. In 2004, I got a scholarship to study English, French, Kinyarwanda, Kiswahili as well as history and geography. I loved it. I felt these studies would save me in one way or another.”

“After completing our secondary school, we felt we had no chance to go to university. It was too expensive. It seems almost impossible for someone living in the camp to go to university. At the time, I got employed as a teacher at the secondary level in the school where I had studied. I was teaching English and French for almost eight months. One evening – I will never forget this day, it was a Thursday –, I came home from work and was told that the DAFI announcement had been posted in the camp. The deadline was the next day! So I collected all my application documents as well as some money for transportation and went to UNHCR's office. I submitted my application and went back to the camp. I waited for a week and got a call from the National University of Rwanda. I was admitted!”

“I had this dream of studying at university but had never really considered it seriously, because our means, as refugees, were very little. So we gathered with the other DAFI recipients and left the camp together to go to the Southern Province, where the campus is located. When we arrived at the university, we met many other students.“

“At the time, the approach was to ask incoming students to take an English test – oral and written – to make sure that their level was good enough before they could join their respective faculties. I did take the test and performed well, with score of 87%, which allowed me to immediately start my curriculum in English Literature.”

“At university, I felt very fine, very supported, and very confident. The fees were paid for and we were also getting an allowance. I could pay for my accommodation, food, the education material. My basic needs were covered. I no longer had the same challenges as before. Of course, I had to adapt to the university environment and to study hard. Sometimes I would get up in the middle of the night to study! I was making a lot of efforts and going the extra mile to make sure that the scholarship was not misused.”

“In 2010, Dr Eric Dwayer, one of my inspiring lecturers from the United States, supported us to get an internship at the American Embassy in Kigali. That is when I got to know the organization IEE. They are the ones who came up with the idea of recruiting English trainers to support the teachers with the new anglophone curriculum. After one month, we got deployed to different schools, for three months. I finally graduated in 2012 and immediately got recruited as an English teacher.”

"DAFI made a very big difference for me. With the scholarship, I acquired key knowledge and skills. Thanks to DAFI, I got empowered and got the chance to empower others. I was transformed. I received all the tools I need to play my part. I need to stand strong in this world and will not stop having high goals and dreams!"

Background information:
The DAFI programme was initiated in Rwanda in 1992. The environment in Rwanda is quite conducive for refugees. The Rwandan Refugee Law provides refugees with the right to work, to freedom of movement and to access documentation. Refugees can own property and can enter into contracts including land-leases. However, despite the favourable legal environment, some de facto structural challenges remain for refugees including: insufficient access to finance for refugee entrepreneurs, limited access to upper secondary, tertiary and vocational education, as well as some other challenges specific to displaced people.

back to main page