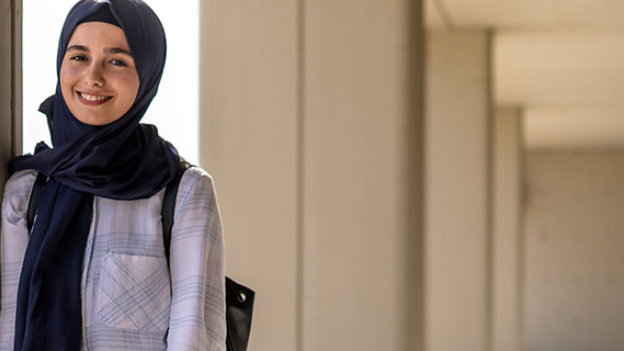 Weam, 19 years old, is a student in Computer Science in her first year at the Lebanese University (UL), on a DAFI scholarship. Weam is from Dara'a in Syria and lives in Lebanon since 2015.

“We came to Lebanon in the summer of 2015. I entered my final year of high-school here in Lebanon but the classes were in English, which was a very big challenge. I learned mostly online, by myself. I also had to face some degree of exclusion then as I was the only Syrian student. During my first year at university, I took Physics, but then I changed to Computer Science. I have just started actually."

"My parents, my two brothers and my sister live in Batroun, north of Beirut. I live here by myself, in a student dorm. I am the oldest one. My mother is a nurse and my father is a religious teacher."

"I feel very happy to be given the chance to study at the university, as it is the road towards independence."

"Life on campus is both beautiful and tiring at the same time. I get to meet a lot of new people. Since I have started my college studies, I have become stronger, in terms of my personality as well as in the area of decision-making. At the moment I am learning English, French, Greek and Turkish."

"On the weekends, I like to play football and tennis, and to walk in the forest. I also love video games. My professional goal is to work in the field of programming or gaming, as a manager. But it will not be easy: first, I will need the financial means to do so and secondly, there are not too many gaming companies in the region. That means I will probably have to go abroad to pursue my career goals."

"My message to everyone listening is that one has to put in a lot of willpower and hard work to achieve one's dreams."

Background information:
Syrian nationals remain the largest population of forcibly displaced persons worldwide. One of the most significant long-term consequences of the Syrian crisis is the disruption of Syrians’ education. Before the war, around 26% of Syrian young people were enrolled in tertiary education; but as the protracted crisis continues, young refugees are facing barriers to access tertiary education in their host countries. It is estimated that the number of Syrians with disrupted tertiary education in Lebanon is 70,000 based on pre-war enrollment figures. In light of these alarming figures, UNHCR launched the "Albert Einstein German Academic Refugee Initiative (DAFI)" programme in Lebanon in 2014.
Over the past four years, DAFI has been playing a pioneering role in bridging the gap between the demand and available higher education opportunities for refugees in Lebanon.

back to main page