“Stop Brexit and stay with us!” – DAAD President Prof. Wintermantel signs joint appeal to the Britons

The party leaders of the CDU, SPD and Greens and other signatories have called on the Britons to remain in the EU. In a letter to the British newspaper The Times on Friday, they wrote that they respected the British decision, but that no decision was irreversible. “Our door will always remain open.” DAAD President Prof. Wintermantel also signed the appeal. 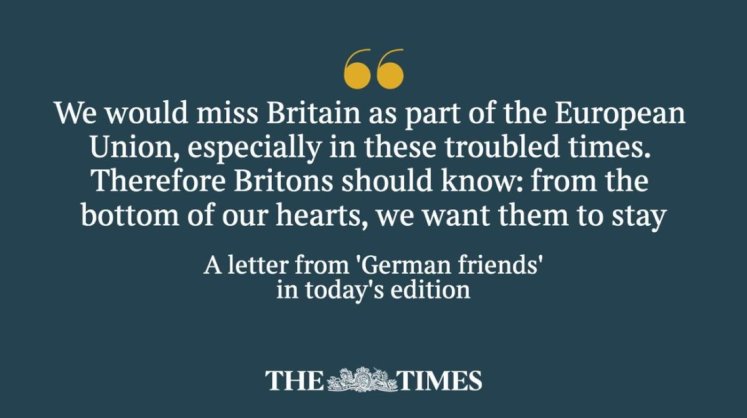 Sir, Without your great nation, this Continent would not be, what it is today: a community defined by freedom and prosperity. After the horrors of the Second World War, Britain did not give up on us. It has welcomed Germany back as a sovereign nation and a European power. This we, as Germans, have not forgotten and we are grateful.

Because we realise that the freedom we enjoy as Europeans today has in many ways been built and defended by the British people, we want Britons to know that we respect their choice. It is theirs, not ours. And should Britain wish to leave the European Union for good, it will always have friends in Germany and Europe. But Britons should equally know that we believe that no choice is irreversible. Our door will always remain open: Europe is home.

Therefore Britons should know: from the bottom of our hearts, we want them to stay.

Published in The Times, 18.01.2019 (Paywall):
https://www.thetimes.co.uk/article/times-letters-german-friends-urge-britain-to-stay-in-eu-rzzzvtdrl

You can find the editorial from The Times here (Paywall): https://www.thetimes.co.uk/article/bitte-stop-brexit-and-stay-with-us-germany-asks-britain-55c9tchl2

Dear Germans, the British will remain your friends

“Dear Germans, the British will remain your friends”, do British politicians and personalities answer in Die Welt on 1 February 2019. Click here to read the text (German) signed by, among others, House of Lords member Baroness Sayeeda Warsi, Member of Parliament Sir Nicholas Soames (both Tory party) and former national soccer player Gary Lineker.