As reaction to the interview with the Hungarian Minister for Innovation and Technology László Palkovics in the current issue of the German newspaper DIE ZEIT, the Alliance of Science Organisations in Germany appeals to the Hungarian Prime Minister Viktor Orbán. In a letter adressed to DIE ZEIT they remind him in advance of the planned reform concerning the Hungarian Academy of Sciences on „the government’s duty to enable and promote science through the provision of human, financial and organisational resources.“ DAAD President Prof. Margret Wintermantel supports this appeal with her signature. 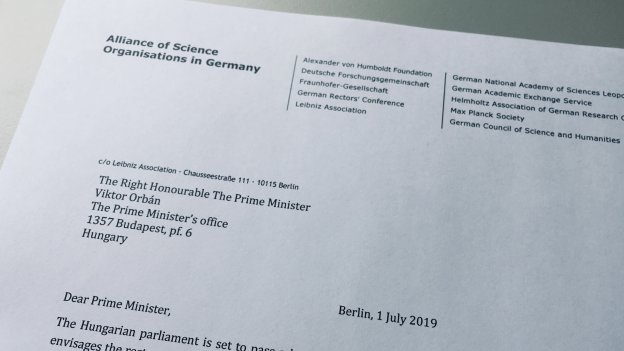 The Hungarian parliament is set to pass a law before 12 July 2019 that envisages the restructuring of the Hungarian Academy of Sciences as part of a reform, including separating the Academy from its institutes, which will be turned into a research network. Prime Minister, your government intends to exercise direct influence over the scientific focus of the new research network.

The planned law ties in with other planned legislation through which the Hungarian government intends to extend its influence in the field of research. The national funding organisation, OTKA, was dissolved several years ago, and replaced with a government authority. The Central European University is relocating its campus from Budapest to Vienna as a result of the planned legislative changes.

The scientific communities in Hungary and European umbrella associations have been protesting against the planned reform of the Academy and have so far published over thirty open letters. In February, nine German research organisations contacted Professor Palkovics, your government’s science minister, expressing their support for the Academy’s presidium.

According to Minister Palkovics, the restructuring programme itself is supposed to be modelled on non-university research organisations in Germany, including the way the East German academies were disbanded. The comparison is inappropriate. Firstly, the integration of a large number of academy institutes into the Leibniz Association depended on a rigorous evaluation of their scientific quality by the independent German Council of Science and Humanities. Secondly, the arrangement immediately provided for scientific autonomy and reliable funding for the institutes.

We continue to be concerned by the argument that the reform aims to channel funding exclusively into research that is in the public interest – as defined by the government. Gender research, for instance, is categorised as
ideology and is therefore excluded from funding because it is supposedly ‘not science’.

Another major concern for us is the financing model proposed for the new research network. Whereas in Germany, the grants from public funds are negotiated with the research organisations by the central and regional governments in a carefully managed process, in Hungary the project-based research funding for the new network will be politically controlled. There are no provisions for scientific autonomy, as found, for instance, in the institutions of the Leibniz Association and Max Planck Society and the assertion, the Academy’s new structure would be built upon the model of the Max Planck Society is factually inaccurate.

Whereas the financing of the German organisations you refer to always includes a level of basic funding that the organisations are free to use as they choose (which has also been the case in the Hungarian Academy of Sciences until now), in future, financing will be determined almost exclusively on a project-by-project basis. The lack of financial certainty will inevitably pose a threat to long-term, sustained research and lead to precarious careers for researchers. Hungary has been the most successful EU-13 country in recent years when it came to obtaining high-calibre research grants from the European Research Council (ERC grants), thanks in part to the achievements of the Hungarian Academy of Sciences and the way it has been developing over the years. However, the planned restructuring could lead to a considerable decline in competitiveness and, as a result, a loss of quality.

The decisive factor is – and will always be – scientific freedom guaranteed through legislation and resources. This freedom, Prime Minister, includes the government’s duty to enable and promote science through the provision of human, financial and organisational resources. Enshrining this principle in a pluralistic research system, and having well-defined, separate functions for science and policymakers, safeguards the integrity of research in the public interest.

The interview with the Hungarian Minister for Innovation and Technology László Palkovics was published in ZEIT Campus, 26.06.2019: